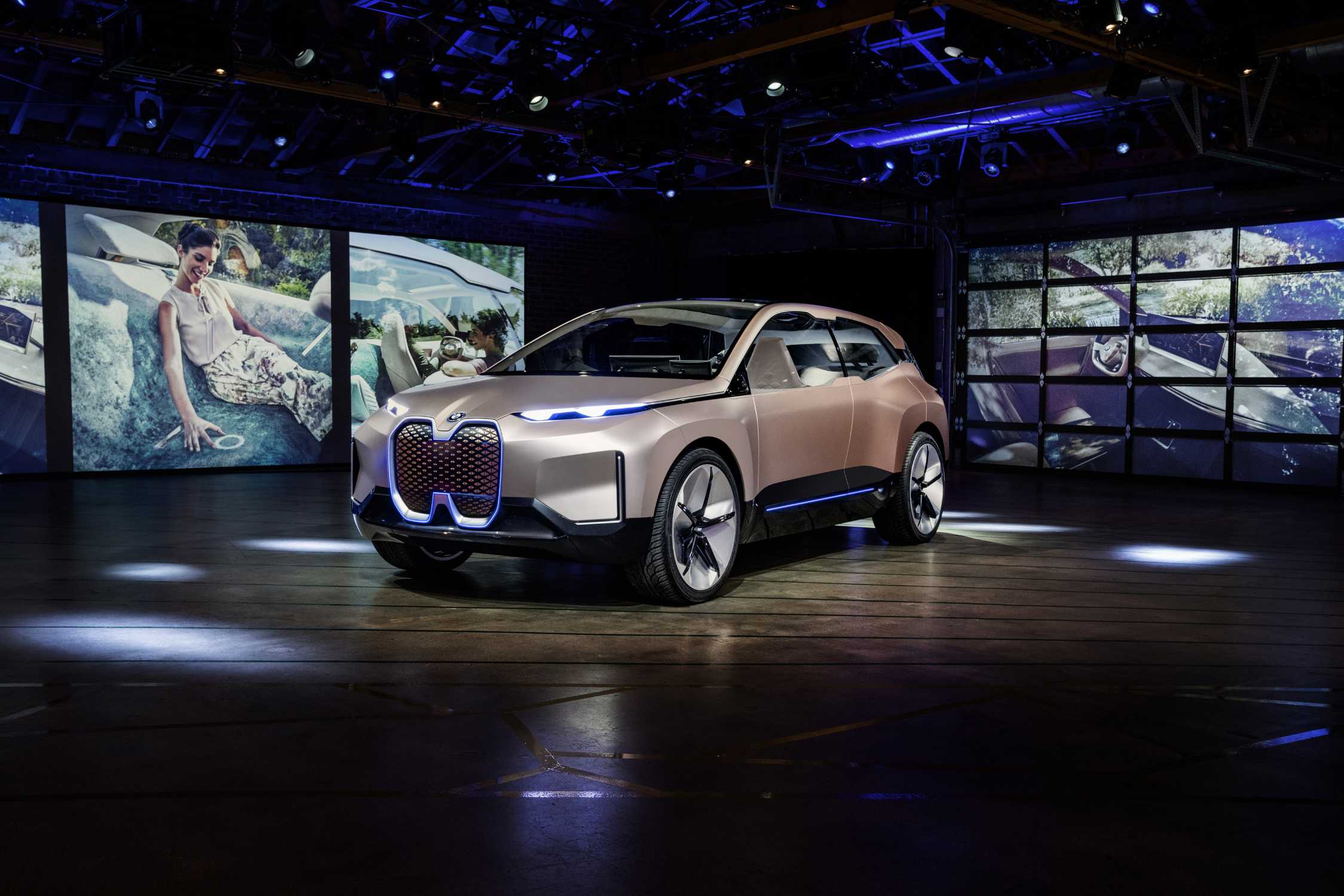 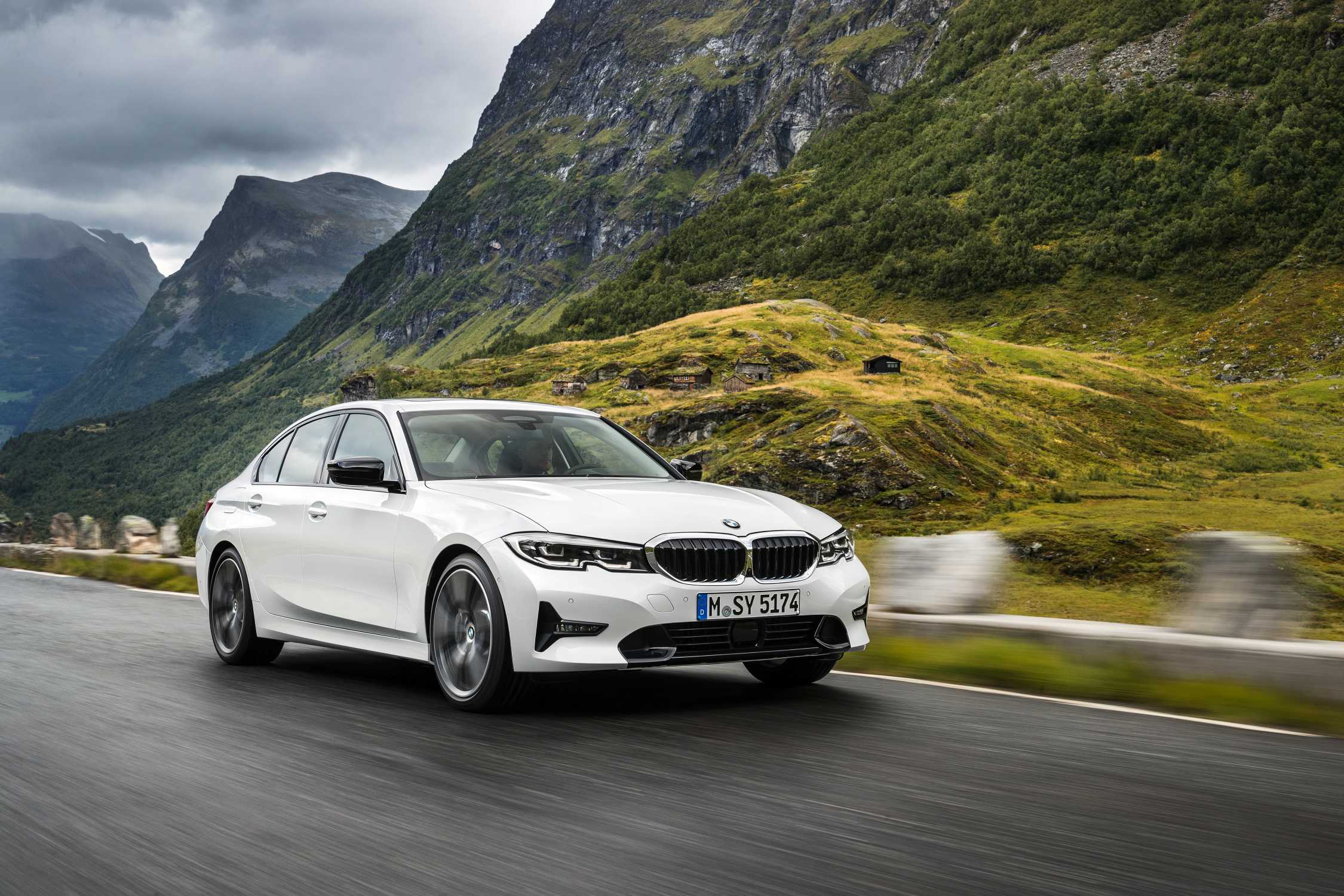 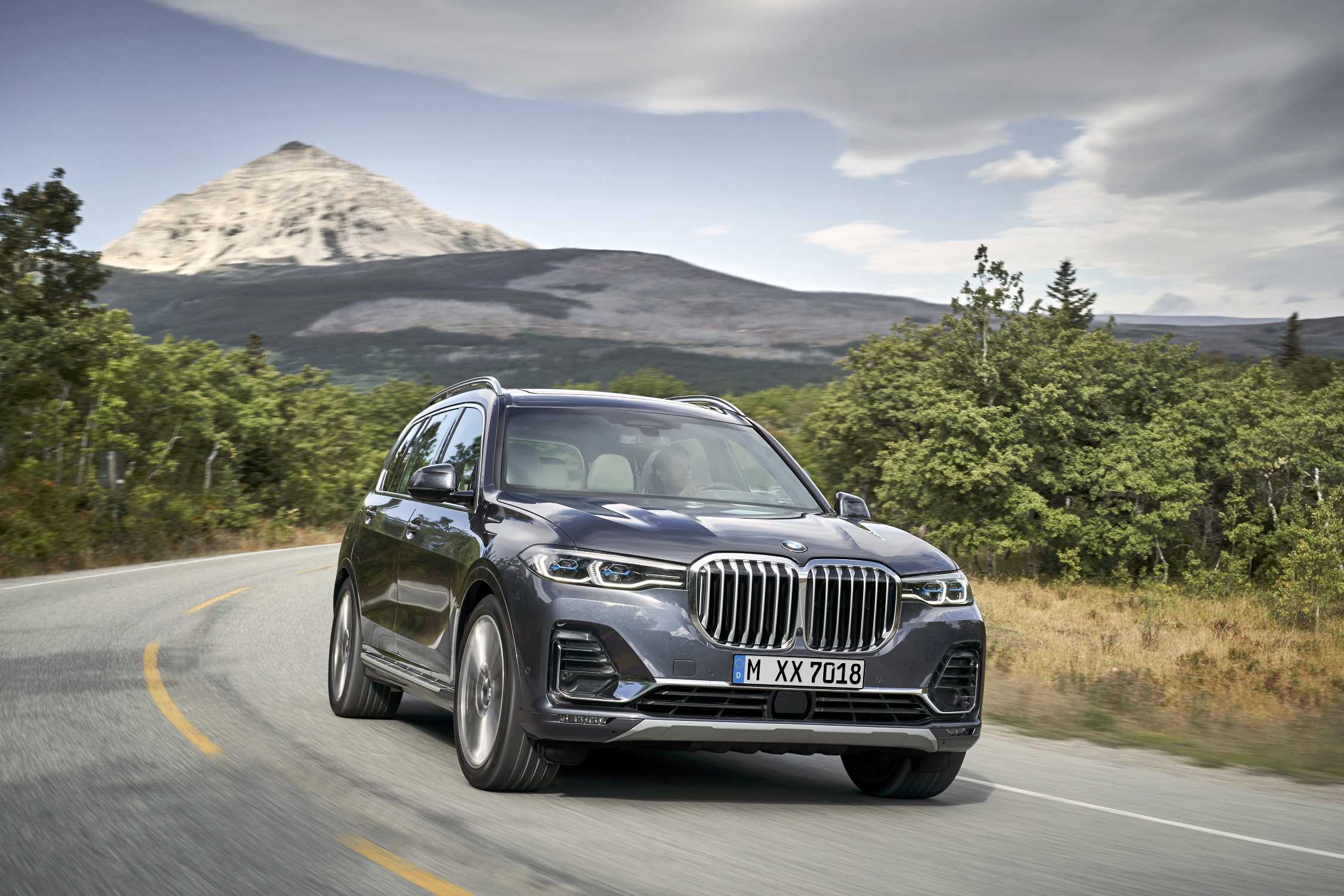 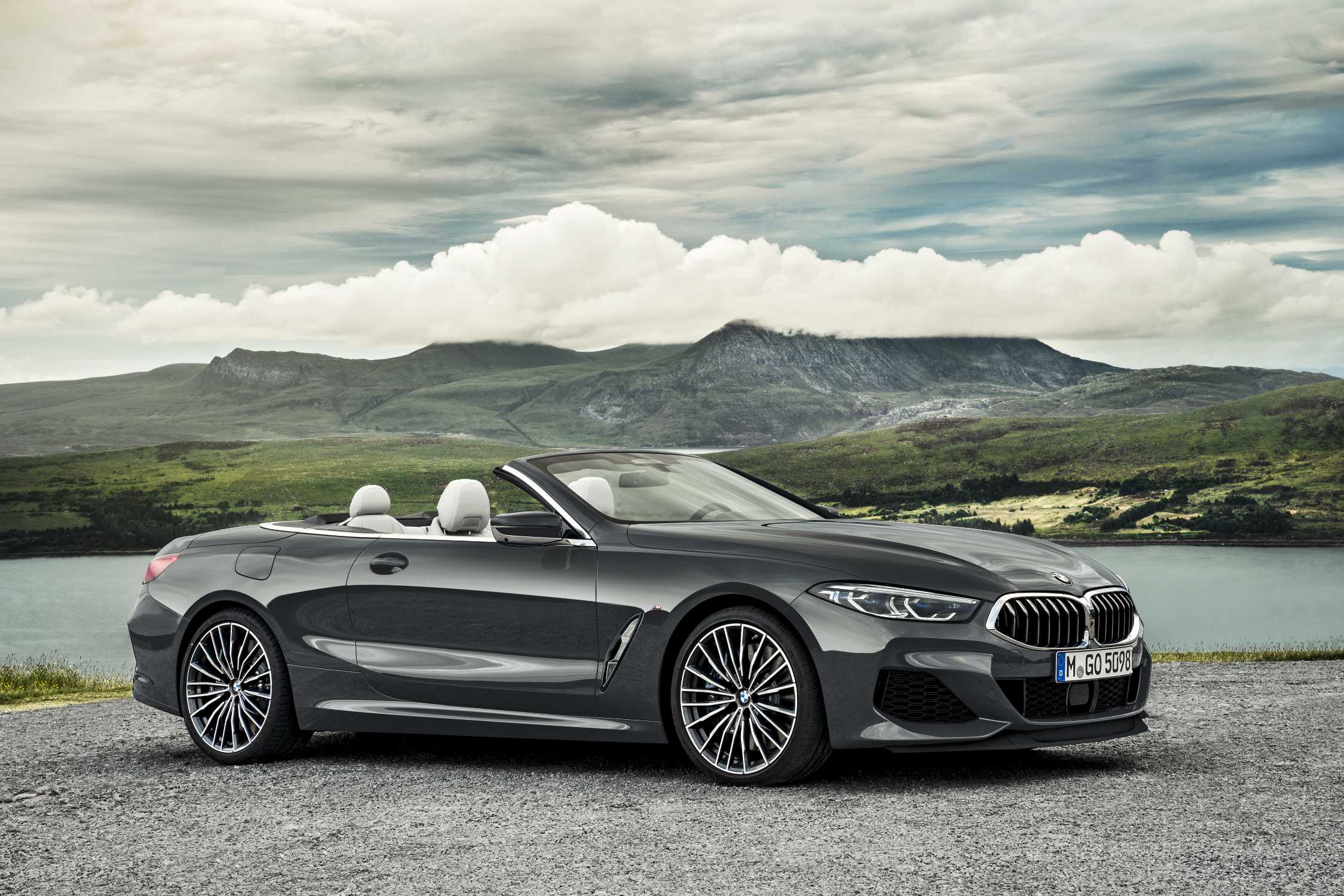 Los Angeles. 28. November 2018.
Here you will see the webcast of the BMW Group Conference at the Los Angeles Motor Show.


BMW has a pageant of highlights in store for the Los Angeles Auto Show 2018, with world premieres for three new production models plus a Vision Vehicle that blazes a trail in more ways than one. The international motor show in the US state of California is hosting the first public reveal of the BMW X7 and BMW 8 Series Convertible. These two models represent the logical next step in the Munich-based premium carmaker’s ongoing model offensive in the luxury segment. Another car making its global debut is the BMW M340i xDrive Sedan (fuel consumption combined: 7.5 l/100 km; CO2 emissions combined: 172 g/km*). And the BMW stand at the Los Angeles Convention Center also provides a glimpse into the future of personal mobility. The BMW Vision iNext will be introduced to the public for the first time and give visitors to the show (which runs from 30 November – 9 December 2018) an enthralling insight into all-electric, fully connected and highly automated driving.

The BMW Vision iNext marks the dawn of a new era in driving pleasure. This is the first time the strategic innovation fields of Automated Driving, Connectivity, Electrification and Services have been fully integrated in a single vehicle, which lends them visual expression with its future-focused design (D+ACES). The areas of action the BMW Group has identified – as part of its NUMBER ONE > NEXT strategy – to ensure the company’s sustained growth also include an increased presence in the luxury segment. The current offensive in this vehicle class is clearly evidenced by the BMW X7 and BMW 8 Series Convertible, which are taking to the stage for the first time at the Los Angeles Auto Show 2018. Other new models from the brand on display in Los Angeles include the new BMW X5, new BMW 8 Series Coupe and new BMW Z4.

Setting its sights on the future of driving pleasure:
the BMW Vision iNext.

The BMW Vision iNEXT showcases the possibilities offered by autonomous mobility in the not too distant future and demonstrates solutions designed first and foremost to inject fresh energy, all while taking a clearly human-centric approach. The production model based on the BMW Vision iNext will serve as the company’s new technological flagship, with the first examples rolling off the assembly line at BMW Plant Dingolfing in 2021.

Adopting the dimensions and proportions of a modern BMW Sports Activity Vehicle (SAV), the BMW Vision iNEXT presents an authoritative figure. Its pioneering character shines through in its clearly sculpted forms and surfaces. The car’s front end is dominated by the large BMW kidney grille at its centre. With no combustion engine to require cooling, the grille is blanked off and serves as an “intelligence panel” housing various sensors. Slim headlights provide a modern take on BMW’s signature four-eyed front-end graphic. The BMW Vision iNEXT displays the powerful, robust stance of a modern BMW SAV when viewed from the side, while its functional two-box proportions and long roofline hint at the ample space inside. Its long wheelbase and short overhangs, meanwhile, give the car’s outline a dynamic edge. Two large opposing doors and the absence of B-pillars ensure supreme ease of access to the car’s interior, which takes the form of a snug and fashionably furnished “living space” on wheels.

One of the interior’s characteristic features is an unusually distinct separation between the driver’s area and rear compartment. A generously sized, continuous seating area gives the rear seats a relaxing lounge character. The cockpit is composed of digital display panels, a flat instrument panel and the steering wheel, with the various elements assuming different states depending on the driving mode selected. In Boost mode, the steering wheel and displays are clearly positioned towards the driver. When Ease mode is engaged, the driver’s immediate environment changes, the steering wheel retracting slightly and the accelerator pulling away to create a more open sense of space. The BMW Vision iNext therefore provides an answer to the question: “What does a vehicle look like that no longer needs to be driven by a person, but can be if desired?”. The innovative technology of the other display and control elements is likewise designed to adapt to the needs of the driver and passengers. In order to preserve the classy but homely character of the rear compartment, this technology is integrated out of sight, and only becomes visible and operable when it is required by the driver or passengers.

A new dimension in luxury:
the BMW X7.

The addition of the BMW X7 to the Bavarian premium carmaker’s model portfolio opens up a brand new dimension in luxurious driving pleasure. The newest and also largest representative of the BMW X family blends lavish presence, functionality and room-comfort with the agile and supremely assured driving properties customers would expect from a Sports Activity Vehicle (SAV). BMW’s new design language brings the modern elegance characteristic of the brand’s luxury-segment models to the exterior of the BMW X7, while also giving it a distinctly self-assured air. Up to three seat-rows or as a six-seater with comfort seats offer remarkable levels of space, sophisticated design and exclusive equipment features combine to give the cabin a truly luxurious feel.

The line-up of engines for the brand’s first luxury SAV comprises a petrol V8 (not available in Europe), a six-cylinder in-line petrol unit and a pair of six-cylinder in-line diesels. All engines team up with an eight-speed Steptronic transmission and the BMW xDrive intelligent all-wheel-drive system. The BMW X7 comes equipped as standard with two-axle air suspension and Adaptive suspension with electronically controlled dampers. Depending on the engine variant, customers also have the option of an M Sport differential and an Off-Road package, not to mention the Executive Drive Pro chassis system with active roll stabilisation. The BMW X7 sticks to the formula of off-road ability combined with impressive driving comfort and agile road handling for which its SAV models are renowned, courtesy of advanced powertrain and chassis technology.

The progressive luxury epitomised by the BMW X7 is further underlined by the broad spread of cutting-edge driver assistance systems on offer. The Driving Assistant Professional package (including the Steering and lane control assistant) and the Parking Assistant with Reversing Assistant most vividly embody the latest advances towards automated driving. Also to be found on the list of standard equipment is the BMW Live Cockpit Professional, comprising a fully digital instrument cluster and Control Display each with a screen diagonal of 12.3 inches. Plus, the new BMW Operating System 7.0 enables optimised multimodal operation using the iDrive Controller, the touchscreen display, the steering wheel buttons, or voice and gesture control.

The second new luxury-segment arrival on show in Los Angeles adds a new breed of vehicle to the BMW line-up – one that allows the brand’s renowned sporting prowess to be experienced in a luxury open-top four-seater for the first time. The BMW 8 Series Convertible fuses exhilarating driving qualities with a design of matchless elegance and a superbly exclusive setting in which to experience driving pleasure and the delights of open-top motoring at their finest.

Dynamically stretched lines and a classical soft-top roof set the tone for the distinctive appearance of the BMW 8 Series Convertible. The electrically powered roof can be opened or closed fully automatically in 15 seconds, even when moving at speeds of up to 50 km/h (31 mph). When closed, the soft-top emphasises the car’s low-slung, sporty lines. But with the roof down it is the two-seater’s elongated elegance that really stands out. Enjoyment of the driving experience is also assisted by a sophisticated interior design majoring in high-precision detail. Opening the roof reveals the seamless harmony of exterior and interior. The instrument panel, door shoulders, areas around the rear passengers’ shoulders and the soft-top compartment cover sweep around the four occupants in a continuous flowing line. The BMW 8 Series Convertible comes as standard with a rollover protection system and a wind deflector, while neck warmers incorporated into the front head restraints and a Winter Comfort package (including a heated steering wheel) are both available as optional extras.

The BMW 8 Series Convertible will be launched with a choice of petrol V8 or six-cylinder in-line diesel engine, with power directed to the road in both cases via an eight-speed Steptronic transmission and BMW xDrive intelligent all-wheel drive. The powertrain and chassis technology developed for the BMW 8 Series range was tested and fine-tuned on the race track as well as the road. The result is breathtaking performance combined with supreme poise and excellent ride comfort. The latest driver assistance systems are also on hand in the new BMW 8 Series Convertible to further enhance comfort and safety. The BMW Head-Up Display forms part of standard specification, as does the BMW Live Cockpit Professional – which comprises a digital instrument cluster behind the steering wheel with a screen diagonal of 12.3 inches and a 10.25-inch Control Display.

Also celebrating its world premiere at the Los Angeles Auto Show 2018 is the BMW M340i xDrive Sedan, which sets new sporting standards in the premium mid-size segment. The most dynamically potent variant of the new sports sedan is powered by a newly developed six-cylinder in-line engine delivering maximum output of 275 kW/374 hp and peak torque of 500 Nm (369 lb-ft). This impressive engine power enjoys dramatic acoustic accompaniment from the M Sport exhaust system – and combines with an eight-speed Steptronic Sport transmission, M-specific chassis technology and intelligent all-wheel drive with a rear-biased set-up to create an outstanding performance profile. The BMW M340i xDrive Sedan completes the 0 to 100 km/h (62 mph) sprint in 4.4 seconds.

A number of design and equipment features specific to this model convey the superior performance abilities of the BMW M340i xDrive Sedan. The large cooling air intakes in the front apron, mesh-design BMW kidney grille and body-coloured rear spoiler, plus a Cerium Grey metallic finish for the exterior mirror caps, air intake bars, the fronts of the BMW kidney grille slats, the grille surround, the exhaust tailpipes and the model badge all help to create this exclusive look.

The range of optional extras available for all variants of the new BMW 3 Series Sedan offers further scope for both customising the car and enhancing comfort. As well as a wide choice of driver assistance systems, customers can also choose from the most recent innovations in the field of intelligent connectivity. The optional BMW Live Cockpit Professional, for instance, brings the BMW Intelligent Personal Assistant into play. This digital companion – also due to be rolled out across BMW’s other new models – can be activated with the voice prompt “Hey BMW” and helps the driver to use various vehicle functions. What’s more, it will acquire new capabilities all the time thanks to updates transmitted seamlessly via the Remote Software Upgrade function.